During a visit to Enniskillen I found the Church of Ireland Cathedral in the town open, and I wandered in to make some photographs.

The cathedral has a wealth of displays and memorabilia from the era of the Royal Enniskillen Dragoons, a former regiment in the British Army.

And the former Royal Ulster Constabulary has not been forgotten.

Outside the Cathedral is an ancient burial ground, which looks across the street to the Roman Catholic Church of St Michael. 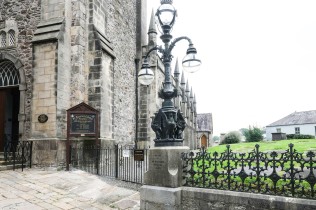