With a couple of hours to kill in Craigavon, I decided to make a photograph of each of the Craigavon Roundabouts – but then I’d second thoughts.  After all, I’d only a couple of hours, not all day!  So instead, I took a drive out to Gilford and Tullylish, and on the way back to Portadown, went to look at the Moyallen Quaker Meeting House.  Here’s a few images…

Gilford is part of the relatively recent ‘Craigavon’ abomination, but historically it lies in Co.Down, not Co.Armagh (as most of Craigavon does) and dates from the middle of the 17th century.   The town was founded by a Captain Magill, an officer in the Cromwellian army, nd became known as Magill’s Ford, or Gilford. The town is situated on the banks of the River Bann. The site of the present mill was sold by the Magills to Thomas Purdy, who began processing flax to create linen.   This continued until the 1980’s when production ceased, and the mill has lain vacant since.  Opposite the old mill is St Paul’s Church, and this old damaged car is sitting at the entrance to the mill.  No reason whatever to photograph it – I just made this photo because it was there!

Tullylish lies between Gilford and Banbridge, a tiny hamlet, with a historic church tower. 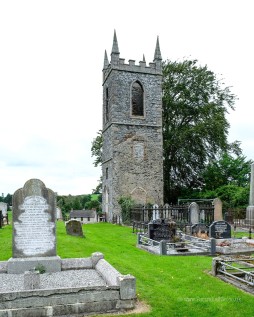 On the opposite side of Gilford, and on the road to Portadown is Moyallen, where a historic Quaker Meeting House is well worth a look.  This unique building was built in 1736.