Kilwarlin Moravian Church and Thermopylae in Co. Down!

Kilwarlin Moravian Church was founded by John Cennick (He of Gracehill, Ballymena fame) in 1755.

Kilwarlin is described on some internet sites as a ‘small village near Hillsborough, Co.Down’. The truth is that it is scarcely that, rather a ribbon development of homes along a very narrow country road, not wide enough for two vehicles to pass, and accessible only with great care.

The church building was rebuilt and renovated in 1834 ad 1887, and outwardly at least retains its historic character.  (The inside of the building is not accessible to casual visitors).

I was in the area on Tuesday 5th November 2019, around 10.30am, when I strolled up around the grounds, armed with the Fujifilm X-T30, and a standard 18-50mm lens.  The camera was set to Acros Film Simulation Mode, to capture black and white images with that fine consistent grain pattern for which the Acros film was famous.  As has become my standard procedure, the camera was also set on Fine Jpeg/RAW – so that the data from the RAW files could be processed in post capture production as colour jpegs.  I decided on an ISO of 400, although for some of the mages I raised this to ISO1600, to maximise the depth of field. 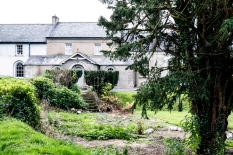 The area to the front of the church is interesting.  The minister of the church from 1834 was one Rev Basil Patras Zula, a Greek aristocrat, who had worked in Dublin, married a local member of the Moravian Church in Dublin, and accepted a call to pastor the church at Kilwarlin.  On arrival he found the church at a low ebb, with only around six members left, He rebuilt the church, gaining new members for the now reinvigorated cause.  At his own expense, Zula had the grounds landscaped as a scale model of the terrain upon which the Battle of Thermopylae was fought, a battle in ancient Greece when the combined forces of Sparta and Athens repelled the Persian invaders.  That landscaping still remains, and is well signposted, so that visitors to the site can see the names of the geographical features where the battle took place. 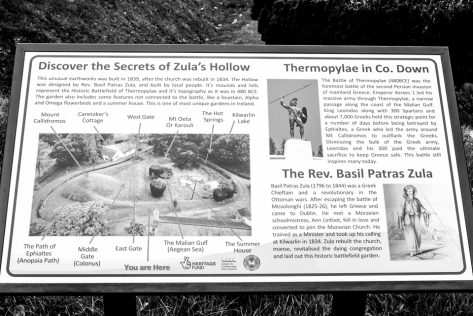 That in itself makes this an interesting place to visit.