How to Make Silhouettes.

There’s something really intriguing about human silhouettes, – they excite the mind.  Perhaps it’s the sense of mystery they evoke.  Who are these people?  What are they doing,  and why are they here?  In a moment of time, they have been captured forever against a background of light.  It’s evocative, – silhouettes make the brain work, trying to piece together the missing information, stimulating those little grey cells and producing the chemicals that trigger our emotions.

They are, perhaps, an illustration of the so-called ‘principles of gestalt’ that inform our artistic appreciation.  In reading the image the mind seeks CLOSURE.  Usually this involves a mental, sub-conscious completion of the image, when an obvious part of the image has been deliberately cropped out, like a vanishing point, or a tight crop on a human form, but in the case of a silhouette the very same principle is at work.  The mind is seeking more information, and that makes for sub-conscious, mental stimulation and excitement.  There is also SEGREGATION at work in a silhouette.  By its very nature, the silhouette is a dark shape against a light background, with the subject(s) starkly segregated from their surroundings.  There is a very great tonal contrast, and that juxtaposition of light and shade is attractive to the mind.

Ok, enough theory.  How do we make a silhouette?

To be fair, you may not actually get a lot of preparation time – sometimes the situation just presents itself, and you have to know how best to capture it – off the cuff.   But if you want to make silhouettes, you can make plans to be in the place where they will happen naturally.

Bresson: We look and perceive a photograph as we do a painting, in its entirety and all in one glance. In a photograph, composition is the result of a simultaneous coalition, the organic coordination of elements seen by the eye. One does not add composition as though it were an afterthought superimposed on the basic subject material, since it is impossible to separate content from form. Composition must have its own inevitability about it.

So, you’ve arrived at a place where the sun is strong and people are walking by, or standing around or engaged in some activity, and you are waiting for the decisive moment to occur when everything is just right for your photograph.  It’s time to consider the second step:-

You can’t do this with your camera on automatic, or programme (even on Aperture Priority).  To make a silhouette, you must separate your exposure from your focus, and that means you must take control of the camera.

You’ve got your silhouette in the camera, and now comes the final step.

In Lightroom import your images and select your silhouette for development.  Crop the frame to get the best possible image and begin to process.  Adjust the sliders in the ‘basic’ panel to find the black and white points, (Careful with the white points – there may not actually be one!) adjust the contrast, the shadows and finally adjust the clarity if necessary and do any necessary sharpening. (Not too much – don’t overdo it.)

This image was made on a sunny January day with low wintery sun. We’d been wandering round Dundrum to get a visual flavour of this picturesque Co.Down town and them climbed up to the Castle to get some photos. The castle grounds were deserted, apart from a couple of children playing among the ruins. They were sure to run along one of the low walls, so it was just a matter of time, patience and exposure. And GOTCHA!

This covered passage is the entrance to a courtyard with a couple of really popular Belfast pubs. One Spring evening while on a Cathedral Qtr Photowalk I had decided to photograph the courtyard from the entrance to the alleyway and when I was doing the exposure readings I noticed that people passing along the passage were outlined in shadow by the light from the courtyard. I waited…  I pounced.

This was at sunset. There was an event taking place in the adjacent open air concert area and some children were walking along the wall. The setting sun on the sea provided the coloured backdrop. I made several exposures over a period of fifteen minutes or so so there was plenty of time to get exposure right. 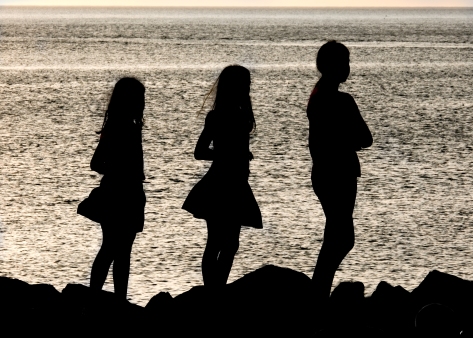 I chose this particular image because of the way the children were forming a pleasing set of ‘steps & stairs.

Cartier-Bresson: In photography there is a new kind of plasticity, the product of instantaneous lines made by movements of the subject. We work in unison with movement as though it were a presentiment on the way in which life itself unfolds. But inside movement there is one moment at which the elements in motion are in balance.

For more help email Bob at bobmcevoy@aol.com, or visit Bob’s Photography Forum on Facebook, where you can interact with other photographers.  You can check out our Basic DSLR Camera Courses HERE.